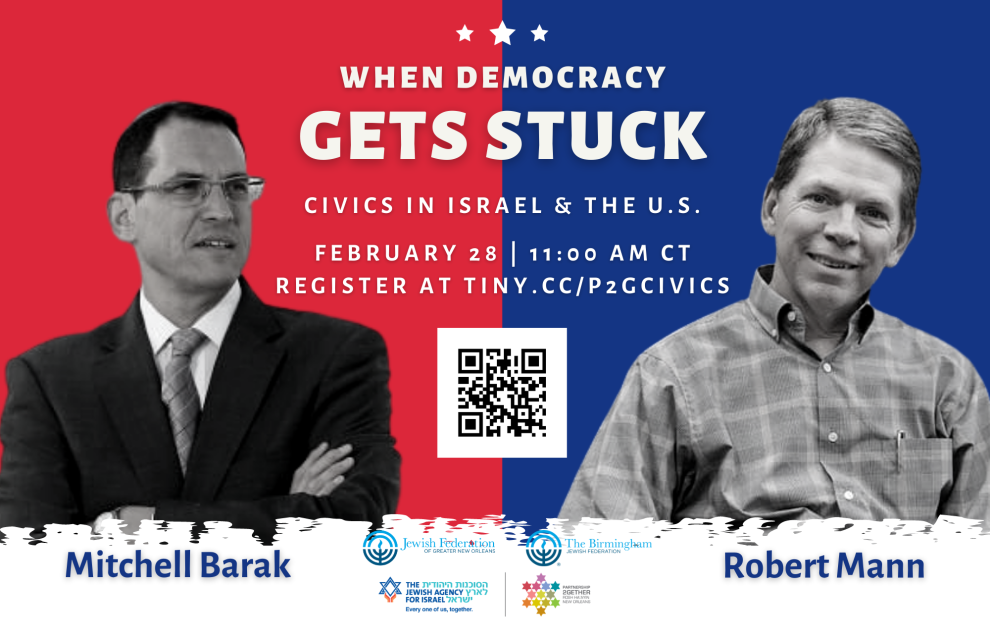 Join Mitchell Barak and Robert Mann on Sunday, February 28 at 11:00 a.m. CT for an informative and engaging discussion on how civics and governance structures work in Israel and in the United States - and what we can do when those mechanisms become stuck.
Mitchell Barak is a pollster, strategic communicator, and messaging expert. Called an “Israeli-American public opinion expert” by the Wall Street Journal, his opinions and surveys have been quoted hundreds of times by leading publications like the Wall Street Journal, New York Times, Washington Post, Bloomberg, Foreign Policy, Politico, The Globe and Mail, Haaretz, Jerusalem Post, and many others. He also appears regularly on the BBC and Al Jazeera as a guest analyst. A New York native, Mitchell holds a BA degree in Political Science and Psychology from George Washington University in Washington, DC. He lives with his wife and their eight children in Jerusalem.
Robert Mann holds the Manship Chair in Journalism at the Manship School of Mass Communication. Prior to joining the Manship School in 2006, he served as communications director to Louisiana Governor Kathleen Blanco. He joined the governor’s staff in 2004 after serving 17 years as state director and press secretary to U.S. Senator John Breaux of Louisiana. Before his service on Breaux’s staff, he was press secretary to U.S. Senator Russell Long of Louisiana. He was also press secretary for the 1990 re-election campaign of U.S. Senator J. Bennett Johnston of Louisiana, and communications director for the 2003 Blanco campaign. In 2015, he was inducted into the Louisiana Political Hall of Fame.
This event is jointly hosted by the Jewish Federation of Greater New Orleans and the Birmingham Jewish Federation, in partnership with the Jewish Agency for Israel's Partnership2Gether program.