The Center for Jewish-Multicultural Affairs (CJMA) is an in-house initiative of the Jewish Federation of Greater New Orleans that contains all of the Federation’s external relations programs and directly reaches out to the wider community, both Jewish and non-Jewish. The Center is initially focusing on four primary outreach areas: [1] African-American relations; [2] LGBTQ relations, through the existing Jewish Pride New Orleans (JP NOLA) program; [3] Latin-American relations; and [4] multi-faith relations.

MISSION STATEMENT -- The Jewish Federation of Greater New Orleans: Center for Jewish-Multicultural Affairs is committed to (1) fostering relations between the local Jewish community and the local African-American, Latin-American, and Multi-Faith communities as well as (2) enhancing opportunities for the LGBTQ Jewish community, and in so doing will seek to build and maintain strong, mutually beneficial, and lasting partnerships with the wider community in the region. Through extensive, impactful outreach programming within and outside the local Jewish community, the Center is one of the primary mechanisms by which the Federation will put into practice the Jewish tenet of tikkun olam (“repairing the world”), while simultaneously increasing the visibility of the Federation, engaging increasingly larger segments members of the Jewish community, and helping to counter the rising tide of anti-Semitism. The Center will seek to serve as a gateway, providing education and information about the Jewish community to other groups in the area – and vice versa – with the goal of creating a heightened understanding and shared purpose between the Jewish community and these groups.

The CJMA is led by an Advisory Council co-chaired by Bradley Bain and Ina Davis. It was made possible by a generous gift from the Goldring Family Foundation.

For the CJMA's two signature programs, check out our Get NOEH Fit and Virtual Civil & Human Rights Mission pages!

For more information, please contact Aaron Bloch at aaron@jewishnola.com or 504-780-5608.

Hosted (virtually) by Xavier University of Louisiana, the final installment of the CJMA's 2021 HBCU Speaker Series - "The Case for Reparations: Past & Present" - explores the history of German reparations to Holocaust survivors that started in the 1950s (and continue today), and the case for reparations for the legacies of slavery in America.

"The Case for Reparations: Past & Present" 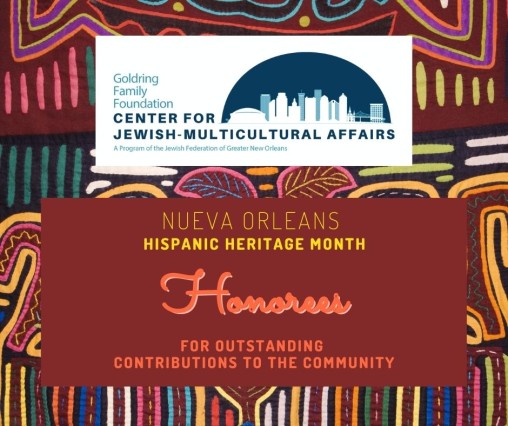 The Goldring Family Foundation Center for Jewish-Multicultural Affairs (CJMA) is excited to announce the 2021 Hispanic Heritage Month Honorees for outstanding contributions to the community.

This year, the CJMA is recognizing exemplary individuals for their contributions to the community during these especially challenging times. 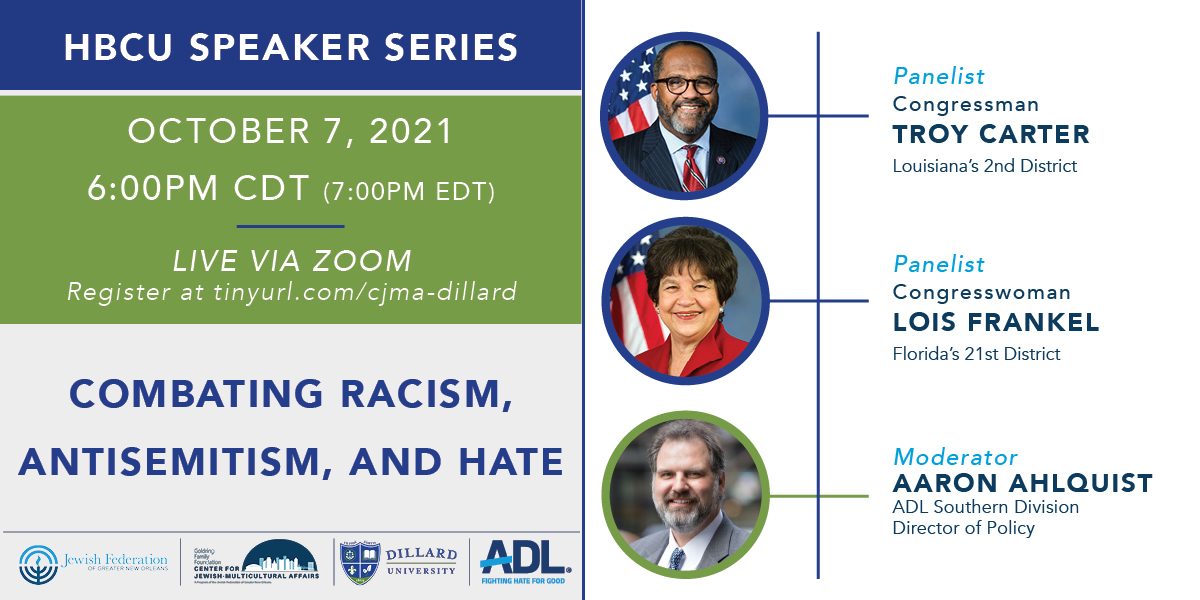 Thank you for joining Dillard University, the Goldring Family Foundation Center for Jewish-Multicultural Affairs, and the ADL on Thursday, October 7 at 6:00 p.m. for a discussion on "Combating Racism, Antisemitism, and Bigotry," featuring Congressman Troy Carter (LA-02) and Coungresswoman Lois Frankel (FL-21). The session will be moderated by Aaron Ahlquist, ADL Southern Division, Director of Policy. 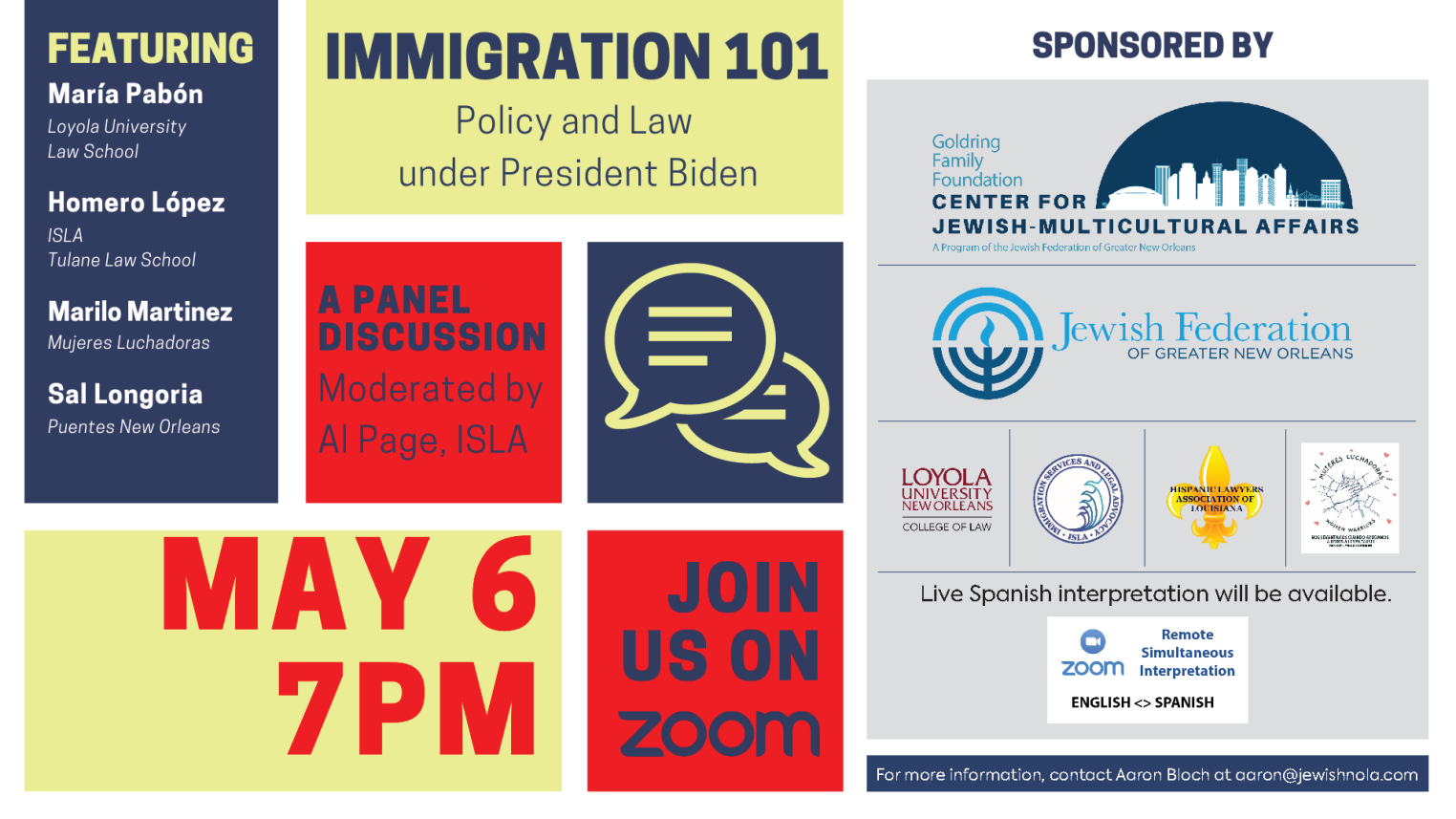 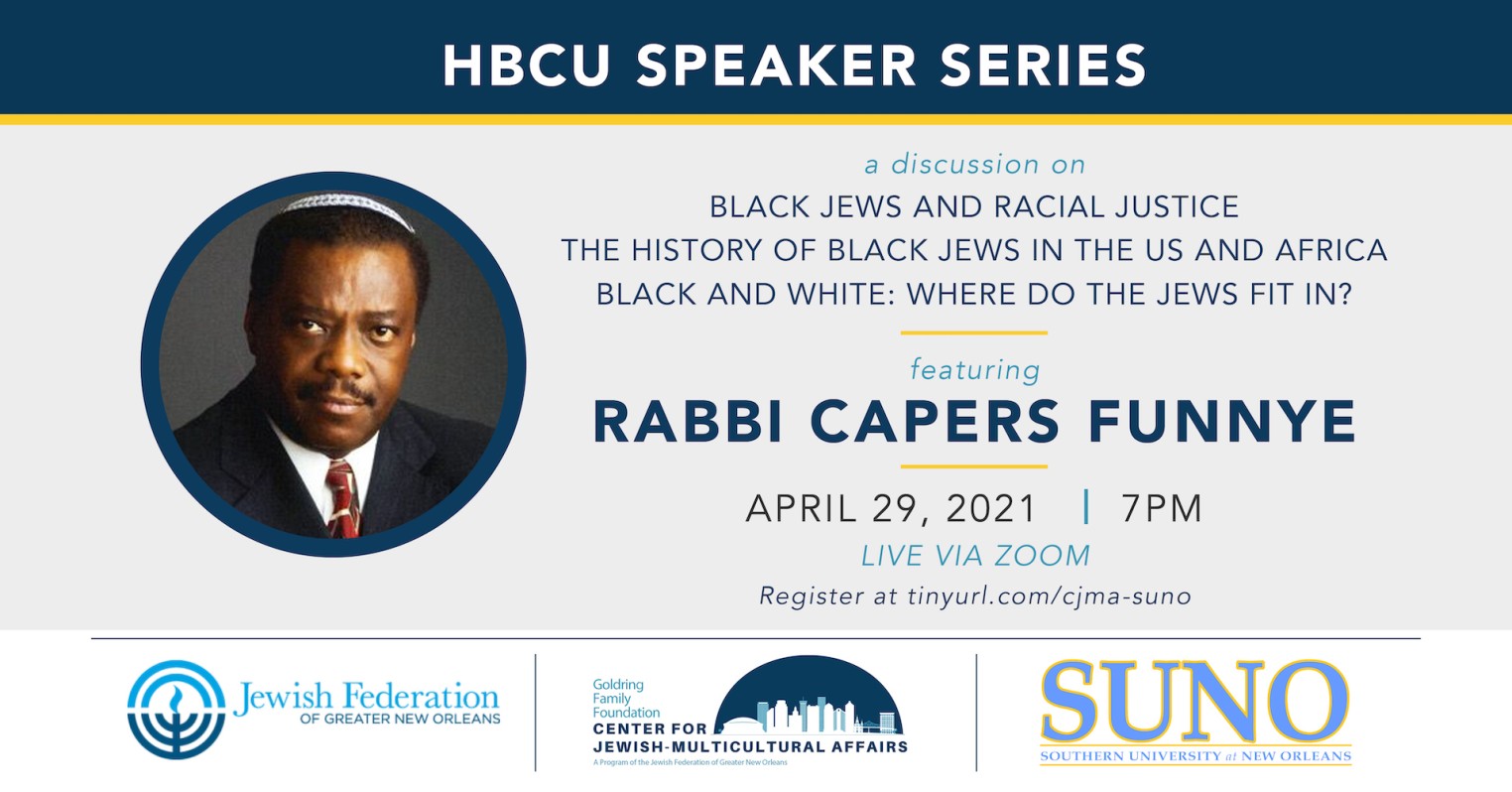 Join the Jewish Federation's Goldring Center for Jewish-Multicultural Affairs on Thursday, April 29 at 7:00 p.m., for the return of our HBCU Speaker Series featuring Rabbi Capers Funnye and a discussion on Black Jews and Racial Justice.
Capers C. Funnye, Jr. is Chief Rabbi of the International Israelite Board of Rabbis. In addition, he is rabbi and spiritual leader of Beth Shalom B’nai Zaken Ethiopian Hebrew Congregation in Chicago and a long-time member of the Chicago Board of Rabbis. Rabbi Funnye is on the board of Kulanu, which supports isolated, emerging, and returning Jewish communities around the globe. He is perhaps best known for being the rabbi-cousin of Michelle Obama. 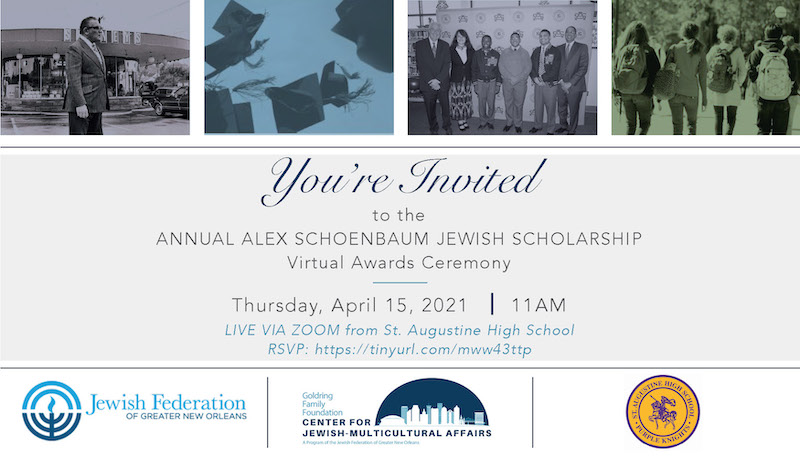 The Jewish Federation’s Goldring Family Foundation Center for Jewish-Multicultural Affairs (CJMA) will be hosting its annual Alex Schoenbaum Jewish Scholarship Fund Awards Ceremony on Thursday, April 15, 2021 at 11:00am. Scholarships are awarded annually to St. Augustine High School students following a schoolwide essay contest.
The scholarship program is part of an effort by the Jewish Federation’s CJMA to create a heightened understanding and shared purpose between the Jewish community and the African-American community.
Register

Shalom: A Cross-Cultural Conversation series returns to WBOK radio (1230AM)

The Center for Jewish-Multicultural Affairs is proud to be continuing the Federation's partnership with WBOK radio (1230AM) to highlight and explore Jewish/African-American relations, with a show entitled Shalom: A Cross-Cultural Conversation co-hosted by Federation CEO Arnie Fielkow and Oliver Thomas.

On April 15, 2021 (8:00am - 9:00am), Arnie and Oliver will be joined by special guests Gilad Katz, the Consul General of Israel to the Southwest U.S., and Dr. Kenneth St. Charles, the President and CEO of St. Augustine High School, for a discussion on cross-cultural collaboration and the benefts of building lasting partnerships.

On October 8, our special guest was Anthony Bean of the Anthony Bean Community Theater! You can listen to the episode here.

On August 12, our special guest was Regional Director of ADL South Central Aaron Ahlquist! You can listen to the episode here.

On June 17, our guests were Aaron Ahlquist and former NBA player Marvin Roberts. You can listen to the episode here.

On February 28, Arnie and Oliver discussed the launch of the Center and previewed what lies ahead! You can listen to the episode here. 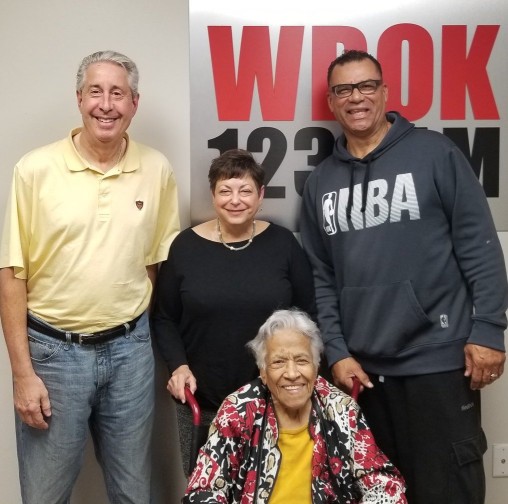 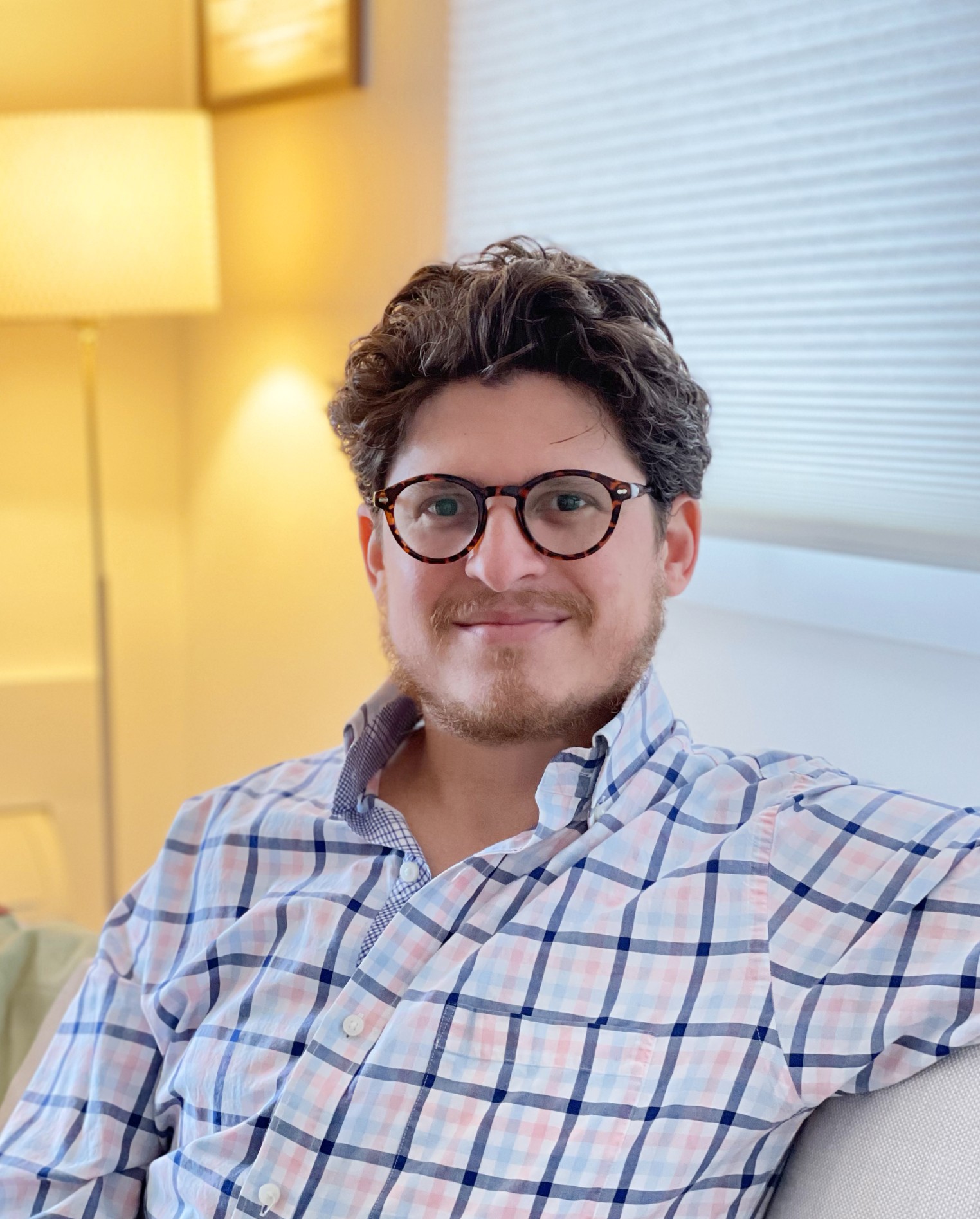 The Jewish Federation of Greater New Orleans is thrilled to announce the appointment of Aaron Bloch as the new Executive Director of the groundbreaking Goldring Family Foundation Center for Jewish-Multicultural Affairs (CJMA). Bloch will replace outgoing executive director, Mithun Kamath, who departed for a senior position in the New Orleans District Attorney's administration.

Launched in October 2020, the CJMA was made possible by a generous gift from the Goldring Family Foundation, which funded it as a three-year pilot program. The CJMA currently focuses on four primary outreach areas: Jewish/African-American relations; LGBTQ outreach, through the existing Jewish Pride New Orleans (JP NOLA) program; Jewish/Latin-American relations; and Multi-Faith relations. Since its inception in the fall, the CJMA has partnered with Loyola University and New Orleans East Hospital on critical outreach initiatives, and the Center also hosted a landmark virtual civil and human rights mission in December that welcomed former United Nations Ambassador Samantha Power. The CJMA is co-chaired by Bradley Bain and Ina Davis.

"I appreciate the Jewish Federation's confidence in me, and I am honored to have the opportunity to lead the Goldring Family Foundation Center for Jewish-Multicultural Affairs to further its mission of building lasting community partnerships between Jewish and non-Jewish communities," said Bloch. "As Executive Director, I will strive to connect the unique visions of individuals and organizations in our wider New Orleans community. Together, we are stronger, and it is in this spirit that I begin my work."

Aaron Bloch was born and raised in New York and has called New Orleans home since 2015. A graduate of Binghamton University, 2001, and New York Law School in 2005, Aaron practiced law in New York for seven years before moving to New Orleans to accept a position with the Orleans Parish School Board (OPSB) as an Education Pioneers Fellow. During his time at OPSB he focused on school accountability, the unification of schools under Act 91, and the formation of a new school at the New Orleans juvenile detention center now known as the Travis Hill School. In 2017, he left OPSB to work on a New Orleans City Council campaign and has since worked on dozens of local campaigns and ballot initiatives as a strategist, manager, digital communications specialist, and field director.

Aaron first came to the Jewish Federation of New Orleans in 2017 as a Board Member of JNOLA, and most recently served as a co-chair of the board from 2019-2021. He is a member of the New Orleans Coalition and previously served as a member of the Friends of Travis Hill Advisory Board, formed to support New Orleans’ system-involved youth with mentorship and support as they leave New Orleans adult jail and juvenile detention facility and return to the community. He recently passed the Louisiana Bar Exam and is awaiting admission to practice in Louisiana.

"We are excited for Aaron to join the Jewish Federation  team as Executive Director of the Center," enthused CJMA co-chairs Bradley Bain and Ina Davis. "Aaron brings his extensive, professional experience building coalitions and advancing regional education to hone the Center’s core missions of outreach and fostering community. Moreover, in his relatively short time in New Orleans, Aaron has already left his mark on the Jewish community, taking on leadership roles including co-chair of JNOLA, the Federation’s “next generation” program focused on networking, community service, and social engagement through a uniquely Jewish lens. The Center looks forward to great advances under Aaron!"

To learn more about the CJMA and its innovative work, visit jewishnola.com/multicultural. 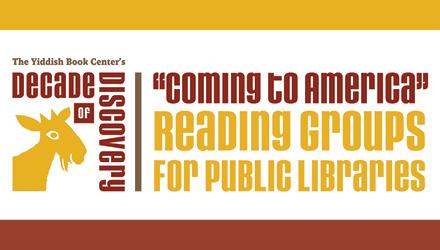 The Center for Jewish-Multicultural Affairs and the New Orleans Public Library have teamed up to bring the Yiddish Book Center’s national “Coming to America” Reading Groups for Public Libraries program to the region! The book club is open to all residents of Greater New Orleans, with books centering on the theme of immigration to the United States from the Jewish and Latinx perspectives.

The program is highlighted by four virtual discussion group sessions, one session monthly for each of the books being read, to be held on the third Sunday of each month between January and April. The four books and their respective discussion group dates are as follows:

A limited number of copies of these books will be available to program participants at no cost.

Please register to participate in the program here. 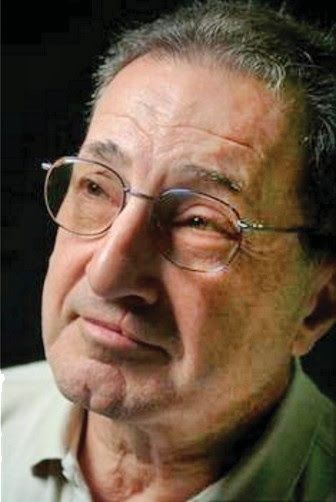 In commemoration of International Holocaust Day of Remembrance, the Jewish Federation of Greater New Orleans: Goldring Family Foundation Center for Jewish-Multicultural Affairs (CJMA) and Loyola University New Orleans College of Arts and Sciences teamed up for a presentation by Holocaust survivor and Anne Frank Center Board member Pieter Kohnstam. Pieter shared his compelling story of fleeing Amsterdam for Buenos Aires to over 200 participants! The talk was Spanish, with simultaneous translation into English, and took place over Zoom.

Pieter Kohnstam was born in Amsterdam and lived with his family in the same apartment building as Anne Frank. In fact, the two families were friendly, and Anne would often entertain Peiter while their parents played bridge. While the Franks famously went into hiding after the first round-up of Jews by the Nazis, the Kohnstams chose to embark on a dangerous journey that eventually led to Argentina.

THANK YOU FOR ATTENDING!

the Latinx and Jewish Immigration Experiences

Thank you for joining the Center for Jewish-Multicultural Affairs and Puentes for a fascinating virtual story-telling event on the shared immigration experiences of the Jewish and Latinx communities. The evening featured videos and testimonials from Latinx students who recently arrived in the United States, a brief historical overview of Jewish immigration to our country, and a presentation from New Orleans’ own Anne Levy (above), a Holocaust survivor.

The Center for Jewish-Multicultural Affairs is proud to have partnered with the Anthony Bean Community Theater on an episode of the show "Reality Teen Talk TV" that aired on October 11, 2020 on WUPL-TV. This episode featured an honest dialogue between New Orleans-area Jewish and African-American teens on a wide array of matters, and provided reason for hope and optimism at a time when our country is witnessing much racial and religious divide. Thank you to the bright and engaging teens from our Jewish community who participated in this important discussion. We hope you watch and enjoy the show!

Did you miss our virtual listening session with local Black leadership? It's available to watch now! We are proud to share a recording of Monday night’s incredible event, which had over 400 people tuning in live via Zoom and Facebook.   We hope you have an opportunity to watch this extraordinary program and heed the call to action. The Center for Jewish-Multicultural Affairs is looking forward to working to turn our speakers' words into deeds. 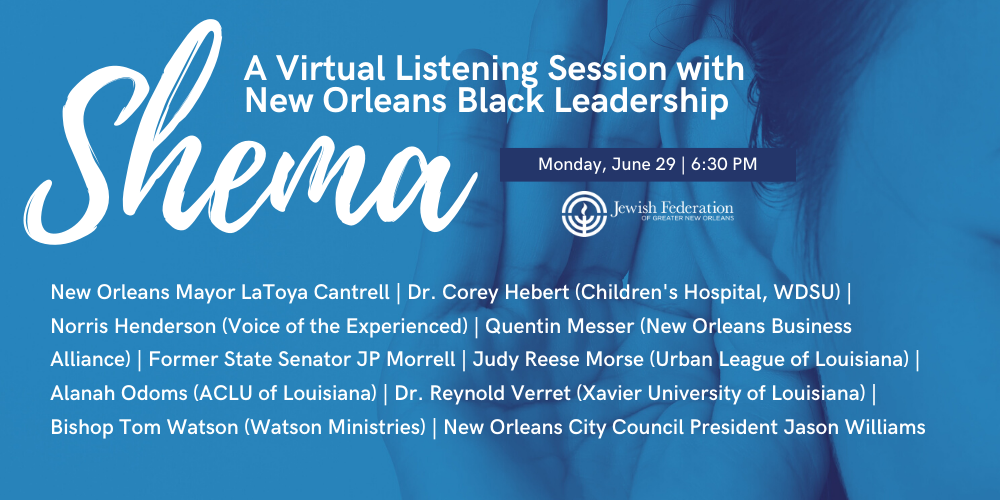