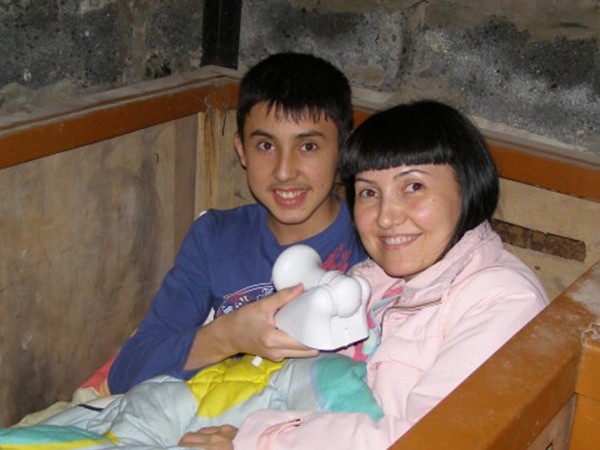 Their dream was more than seven years in the making. Aleksandrina, their teenage daughter, was the first one to complete the journey. Before fighting erupted in eastern Ukraine, she moved to a Jewish Agency absorption center in Karmiel to learn about Israeli society, study Hebrew and prepare for college. But then the battles started across Lugansk.

Living in a Conflict Zone

Fearing for their lives, Oksana, Vycheslav and their teenage son Artur hid in the basement of their house for two months.

“We lived in a state of war, citizens being wounded on both sides,” Vyacheslav tells. “There was no one to protect us. There was no electricity in the homes, water supply was minimal and at limited times. The telephones were cut off.”

“Nothing was functioning in Lugansk,” Oksana remembers. “Not the police, not the education…Everything was closed. The children were terrified to leave the house. We sat in the basement of our house...We lived on potatoes, barley, onions, dry food.”

Artur had to study by battery-powered lamp—but the family could only buy batteries when the shooting died down. He and Oksana slept in a potato crate. Worse, they had no way to contact Aleksandrina, to let her know they were still alive.

“We tried to take as little as possible with us,” says Oksana, “and we tried to hide our son from seeing the destroyed homes all around us, the remnants of a car which had exploded with people inside it.”

The road to Kharkov was long, filled with terrifying checkpoints and menacing soldiers. Arriving at The Jewish Agency center was a relief. “We were surprised to receive such a warm welcome from members of The Jewish Agency in Kharkov. We were very touched by the concern of total strangers, people wanting to help and support us. It’s moving, it made us happy,” Oksana says.

And staff was in touch with Aleksandrina, too. She knew they were coming. And when their plane landed at Ben-Gurion Airport, she was there to greet them.

Vyacheslav and Oksana now live at an absorption center and are learning Hebrew at an ulpan course. Artur is studying at ORT-Polytechnic, a Jewish Agency program in Nahalal, and Aleksandrina is awaiting her army placement into the IDF.

“It’s a dream for a person from Lugansk to come to this place, to Israel. And not everyone is blessed with this opportunity,” says Oksana. She smiles, “This is our home, our one and only home.”