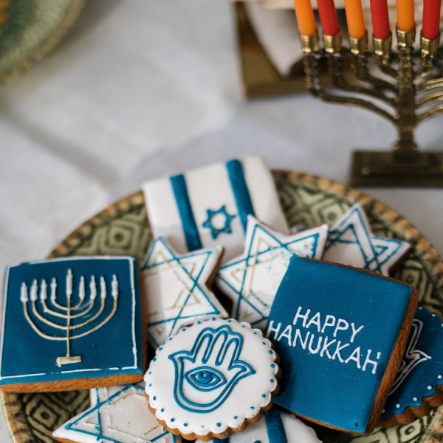 Tens of thousands of Jews affected by the war in Ukraine will be able to celebrate the upcoming holiday of Chanukah with joyous activities and celebrations, thanks to dozens of initiatives  Jewish Federations of North America are supporting.
“Chanukah symbolizes the Jewish people’s defeat over darkness and forces of destruction, and this message is so relevant today for our brothers and sisters impacted by the war in Ukraine,” said Jewish Federations of North America President & CEO Eric Fingerhut. “It is our duty and privilege to bring the light of Chanukah to Jewish people in Ukraine and neighboring countries, working with our partner organizations so that they can celebrate this joyous holiday during such difficult circumstances.”
Some of the Chanukah initiatives that Jewish Federations are making possible include:
Mother-daughter volunteers Rabbi Ilana and Daniella Baird from California will lead educational programming on Chanukah for refugees in Barcelona, working alongside the Jewish community’s progressive Comunidad Judia Bet Shalom, which has also been supported by Federations’ emergency campaign with supplies and volunteer coordinators.
Since the outbreak of the war, Jewish Federations have raised a collective $78.8 million for Ukraine aid. They directed funds to their core partners JDC, The Jewish Agency and World ORT, as well as to over 50 NGOs providing humanitarian aid and relief to refugees in Ukraine and neighboring countries.  Funding supports emergency operational costs, temporary housing and transportation costs, security, humanitarian support and trauma and medical relief, and immigration and absorption in Israel.  Federations’ latest allocation of $7 million is bringing winter relief to over 22,000 Ukrainian Jews in partnership with JDC and Chabad, and is helping to make Russian aliyah possible, with The Jewish Agency.
In addition to providing humanitarian aid for refugees and placing volunteers, Jewish Federations successfully advocate for expanded refugee rights and resettlement in the US and operate a $1 million Ukrainian Resettlement Grant Initiative with matching funds from the Shapiro Foundation.
Share